I spent my childhood in a quiet part of outer Bangalore once called Sarakki Layout, but later renamed JP Nagar. My father liked to complain about losing the warm, vernacular ‘Sarakki’, and I was never curious what lay behind ‘JP’. A decade later, I could draw a hazy relation between those initials and a handful of parties across the country, relics of an older political force that went by the same initials.

Today, the ruling party is working hard to turn legends of the anti-colonial Left, like Bhagat Singh and Subhas Bose, into heroes for the Hindu right. Still JP is out of the picture. Nobody in power seems to want him, and as I finally read his story, I could see why. Revolutionaries are either buried deep or hidden in plain sight, as JP was in the place where I grew up.

In a crisp 200 pages, The Dream of Revolution — a biography begun by the late historian Bimal Prasad, a close associate of Jayaprakash Narayan’s, and completed by his daughter, art historian Sujata Prasad — narrates the singular, often surprising political life, which bridged the era of Bhagat Singh and civil disobedience with that of George Fernandes and the Janata Party. For five decades, Narayan had a hand on the wheel of the national project, always pulling it left, from the grip of powerful classes. His aim was always a more complete revolution; even in the end, when his compass betrayed him.

For most of his twenties, Narayan was a student in the US, brilliant and broke, sustained by menial jobs and the Marxist canon. He returned to India in late 1929, determined to “join the Congress and try to radicalise it” on the lines prescribed by Lenin — which was not unusual. Already the story has surprises, at least for my generation, who largely have no idea that in the decades before independence, the real challenge to Gandhi’s Congress was from the Left. Young and hungry hearts opposed Gandhi’s philosophy, coterie and organisation as too right-wing, for accommodating the interests of zamindars, capitalists, and even viceroys along with those of the masses they exploited. 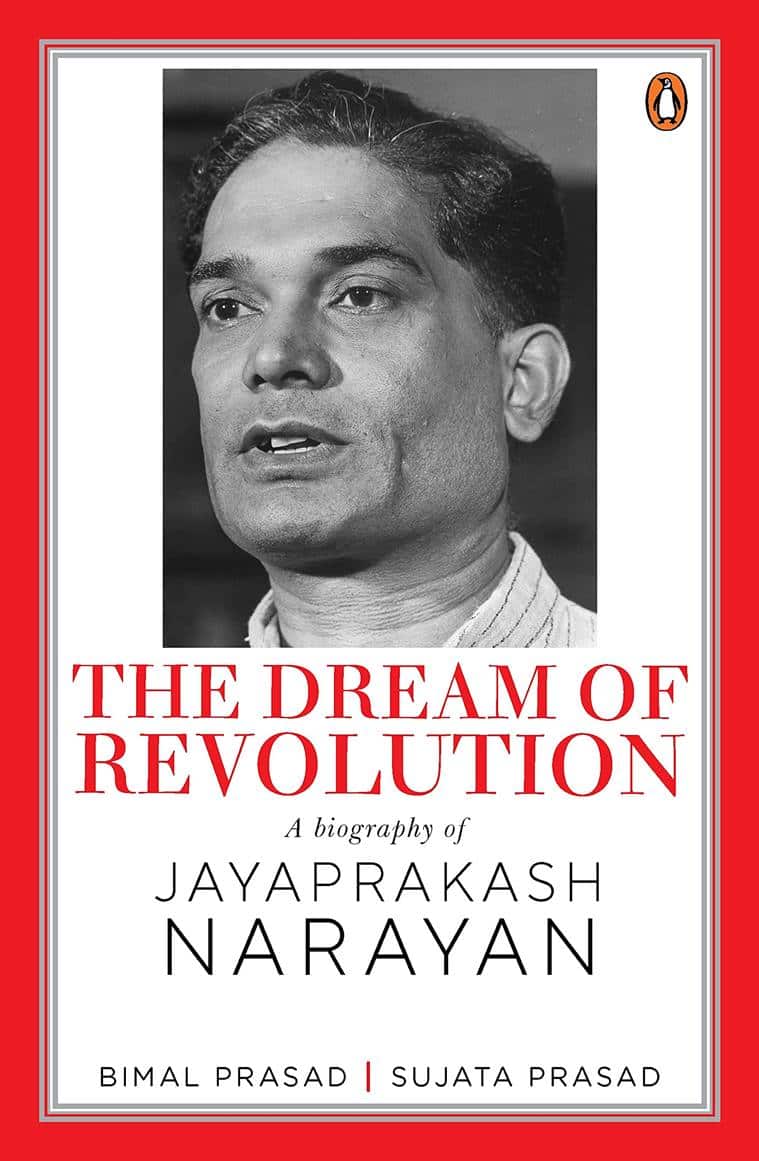 In time, Jawaharlal Nehru, too, would be called right-wing, by younger firebrands drawn to Bose. But for now, in the early thirties, it was Nehru who represented the socialist dream — “romantic, undogmatic, deeply personal and even poetic”. JP was soon at his side. His wife Prabhavati, however, was a disciple at Gandhi’s ashram at Sabarmati, and was so committed to the Mahatma’s ascetic ideals that she took a vow of celibacy (The book does not dwell on JP’s opinion of this). Thanks in part to Prabhavati, Narayan both lived and articulated, as a theorist, the tension between loyalty to Congress leadership and longing for revolutionary progress. He had a strong way with words, and every excerpt in The Dream of Revolution is a new delight.

His writing swayed many younger workers, showing how “Socialism was superior to Gandhism, the parliamentary path, as well as individual terrorism — three ideological approaches which were contending for ascendancy in the Congress,” according to one young Congressman in Kerala, EMS Namboodiripad. In 1934, with Nehru’s blessing, Narayan and others formed the Congress Socialist Party: a medium between Gandhi’s movement, which was nationalist but not socialist enough, and the Communist Party of India, who were socialist but not nationalist enough. As a leader of the CSP, Narayan could try to pull the Congress to the left, encouraging labour and peasant militancy, and facing down the fury of conservative generals like Vallabhai Patel and Rajaji (C Rajagopalachari). From then on, for the next four decades, every governing regime — Congress ministries or the Raj at war, Nehru’s republic or Indira’s — would have JP at its flank, ready to prod or to attack.

First, though, the war years held in store an almost unbelievable series of adventures. Over long stints in prisons, Narayan advanced increasingly radical plans. Prabhavati smuggled letters to him in the binding of books — with code words and all — until they were caught in the act. The secret letters were splashed across major newspapers, but oddly, not excerpted in this book. Desperate to participate in the Quit India uprising in 1942, Narayan and five friends escaped over the wall of Hazaribagh Central Jail on the night of Diwali. They survived on forage in the jungle, and travelled in disguise. The suppression of the August kranti left Narayan deeply dismayed, and he promised young Indians an ongoing revolution. He then formed a band of guerillas to operate from across the border in Nepal. He was captured, engineered an ambush of his prison camp, escaped again, was captured again and finally imprisoned, this time with a vengeance.

The Dream of Revolution fits all this action into less than 10 pages, without many citations, which is a shame for at least two reasons. It reduces wildly intriguing events to a few heady statements, like these about JP and his guerilla comrade Vijaya Patwardhan: “Their escapades were legendary, evocative of an erotic complicity that was tender and intimate. The camaraderie survived the tumult and turmoil of their stormy lives but ended when the police got wind of their secret location.” It also makes short work of a pivotal period — a period after which Narayan stepped back from the political fray, but still yearned for a revolution which would not be cut short.

If Narayan’s life had ended at this halfway point, just past the age of 40, we might remember him better. But unlike Bose, Gandhi or Patel, or even Nehru, he had more than three decades of public life ahead of him. From 1946, however, as his colleagues prepared to take the reins of power, JP began turning away, heeding Gandhi’s call to sarvodaya, social transformation in the countryside. From a Gandhian viewpoint, as from a Marxist one, the transfer of power in 1947 was an unfinished revolution. Narayan, now fully reconciled with Prabhavati, put his energy and resolve into reforming its rural society, through the bhoodan campaigns of Vinoba Bhave. From his ashram in rural Gaya, he continued to weigh in on national affairs, advocating for the poor and marginalised, and against Hindu communalism (which could, he noted wisely, “easily masquerade as Indian nationalism, and denounce all opposition to it as being anti-national”). His monumental stature only grew, along with his dismay at India’s new leaders, whom he saw becoming more venal, communal and undemocratic.

So it was that in the late years of his life, when rioting students fired up general protests across Gujarat and then Bihar, JP cast his lot with the storm. He gave them his moral authority and his leadership, and they gave him his long-awaited chance at sampurna kranti, “total revolution”. Through Narayan’s life, his revolutionary impatience had warred with political prudence (urged by Prabhavati) and loyalty (to Gandhi and Nehru). Now Prabhavati, Gandhi and Nehru were dead. Riding on surges of mass protest, riots and bloody reprisals, the JP Movement assumed the form of an insurrection against Indira Gandhi herself. The socialist legend grappled bitterly with the socialist prime minister — and helped precipitate the Emergency, the Janata front, the end of Congress dominance and the dawn of the Hindu right.

“Revolution has come, but now, when I have grown old,” Narayan said, poignantly, in 1974. At the end, he was the left-wing saint so intent on seeing revolution that he failed to see among his followers the upper-caste reactionaries, opportunists, the RSS, the ABVP, and the young men who would climb from his coat-tails to build their own cult of power. His life, and what he stood for, is the last thing they want us to remember today.

(Karnad is a journalist and author. He is the recipient of the 2019 Windham Campbell Prize for non-fiction.)