Pawo Choyning Dorji wanted to study politics and governance, he was training to become a monk when cinema happened. Now, his directorial debut Lunana: A Yak in the Classroom is headed for the Oscars. The film has won Bhutan its first ever Oscar nomination, and only its second film to be sent to the Academy Awards, after Khyentse Norbu’s Tibetan-language drama The Cup (1999).

Competing in the International Feature Film category, with Drive My Car (Japan), Flee (Denmark), The Hand of God (Italy), and The Worst Person in the World (Norway), Lunana… is a story of resilience. Submitted for last year’s edition, it was disqualified, because the Academy didn’t recognise Bhutan’s national film committee, which hadn’t submitted a film in so long. This time around, when he was submitting the film, Bhutan/Bhutanese didn’t feature in the country/language lists on the Academy’s website. The clock was ticking, there was much to-and-fro, and after the Academy updated the website, twice, the film charted its own karma. It had reached this stage minus the Oscar lobby channel. Getting nominated was not his intention, not even a wild dream. “I wanted to submit it because in this kind of world, Bhutan is irrelevant. I just wanted to show that Bhutan has a place,” says Taiwan-based Dorji, 38. The film has won a string of awards, including an audience award (narrative feature) at the 2020 Palm Springs International Film Festival, where Bong Joon-ho’s Parasite (2020 Oscar winner) had received the Fipresci screenplay prize. Lunana… pits contemporary reality against ancient wisdom. It opens with a juxtaposition, a foreshadowing. In the high mountains, a woman sings Yak lebi lhadar, a yak song of separation and sacrifice, sung as an offering, as a grandmother in the city tries to wake up her grandson Ugyen, who’s wearing a “Gross National Happiness” tee, from his slumber, literal and metaphorical. But real awakening will need him to embark on a journey, inwards, into the self and his country. The dreams of both the reel Ugyen, and the real-life singer Sherab Dorji, who plays the character, lie in the West, in faraway Australia. In the film, the school teacher awaits his visa as he sings Creedence Clearwater Revival in pubs. He’s sent to Lunana, high up amid snow peaks, one of the remotest corners in the world, to complete his final year of the government’s five-year teaching mandate. There, his students, including the electric Pem Zam — repeat after him Hindi-sounding singsong Dzongkha alphabets, eager to live different lives, be more than just yak herders or cordyceps farmers — tell him: “a teacher can touch the future”. 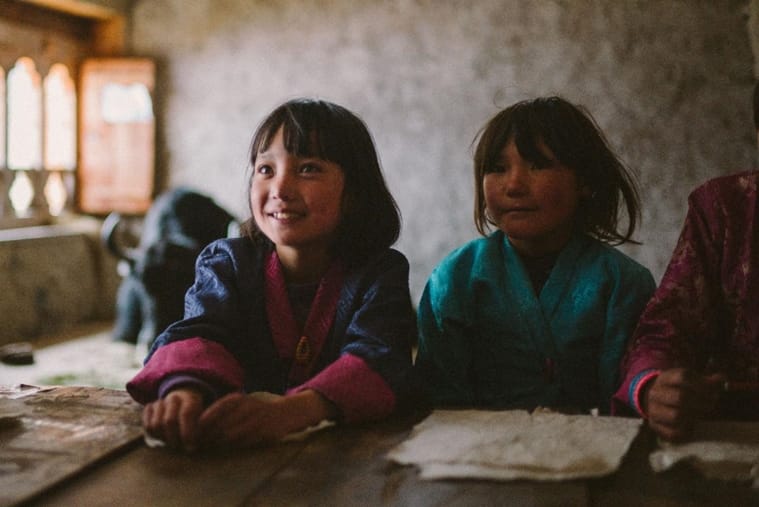 Pem Zam (left) and another girl in class

The lens movement, as he makes his ascent up the mountains, parallels Ugyen’s spiritual journey. If the handheld, initial shots are jerky and tight, to reflect “he’s lost, unsure of himself, what he wants, where he belongs”, it stabilises at the top. The first time the camera goes wide, and we see Lunana, is when the snow mountains come into view, as the characters talk about the snow lion’s disappearance. The handheld camera stabilises, on a tripod, only when Ugyen agrees to be the teacher the village has been waiting for.

Lunana… is shot on solar-powered batteries in a documentary feature style, with non-actors and villagers who’d never seen a film before. For them, the camera could well be a yak, which plays a key role in the movie. The classroom, symbolically, is protecting the yak, which signify purity, endurance, courage, perseverance, generosity and ancient wisdom: aspects teacher Ugyen can learn from. “I told the locals I want a yak in the classroom, they had never heard of this, yaks are not cows, are semi-wild. We had to break down the class wall to fit Naka (called Norbu in the film), the star of the film, a most gentle, and cooperative yak, because he was old and half-blind. He passed away after the film’s completion but lives on in it”. A Bhutanese fable, Lunana… is reminiscent of Rabindranath Tagore’s story The Postmaster. It tells a universal story and its magic is that “within its simplicity, it celebrates a universal human quality, of seeking that where you belong, seeking home”. Dorji takes his film’s protagonist, and himself, on this interior journey to drive home the point that happiness is not elsewhere, it’s in being content. With great restraint, the director ensures that this sweet pang of a film hits where it hurts the most, it makes us feel, but never devolves into sentimentalisation, its catharsis lie in not the obvious, but in the honest. Dorji often gets told he “must be a very happy man”, for Bhutan banks on Gross National Happiness. He says, “In Lunana…, I’m trying to reflect what Bhutan is going through, the huge migration of the youth, of the teachers, to the glitz and allure of the West, to places like Australia. I’ve heard Perth and Sydney has around 4,000-5,000 Bhutanese, now that might be too little in India’s case, but for a country of only seven lakhs, that’s a lot of people. The No.1 job losing workers in Bhutan is teaching, but I’m not telling them, hey, don’t go, there’s so much beauty here. I’m saying, go chase your dreams, but sing your own songs wherever you are’.”

Born in Darjeeling, where his diplomat father had moved from Bhutan, Dorji studied in Kodaikanal and would return, in his adult years, to Dharamsala, at a Buddhist monastery, to become a monk, under the tutelage of Norbu. With his multinational, multi-cultural upbringing, Dorji — who’s lived in India, Bhutan, Switzerland, the US, Middle East, and now divides his time between Taiwan, Bhutan and India — too, had frowned upon Bhutan’s past, tradition, culture as backward, but was “blown away” by his encounters — a father’s cracked, calloused bare feet in icy Bumthang valley, next to his toddler in rain boots; unbeknownst of global warming, a yak herder links melting snow peaks with Bhutan’s animals: the mythical snow lion, dragon, Garuda, the real tiger, as symbols of the enlightened mind/heart, now disappearing owing to “greed, human overconsumption”. The film echoes these stories.

A still from the film

“We were the last country in the world to connect to television and to the internet. As a country, we were in self-isolation, to guard and protect our culture, our identity. I was 13 when TV arrived in Bhutan. It became a status symbol. Cows and yaks were sold to buy TVs, that were kept in shrines at homes, and offered flowers and incense. It gave a glimpse of the outside world, beyond the mountains of Bhutan, to the locals, who wanted to sing, dress and be like the ‘foreigners’. It shook the very foundation of a ‘sense of contentment’,” says Dorji.

While Bhutan’s three-decade-old domestic film industry thrives on Romeo-Juliet and Bollywood-inspired, song-dance stories, in colourful costumes, where some directors would even churn out four films in a month. But it is so small that independent filmmakers didn’t dare imagine they could make films of an international level, until Norbu’s The Cup, and Travellers and Magicians (2003). Norbu “is the reason why I became a filmmaker,” says Dorji. Norbu took him under his wings, taught him the trade’s tricks, and how to tell stories equipped with a camera. He made Dorji his assistant on Vara: A Blessing (2013), featuring Bollywood actor Shahana Goswami and Bharatanatyam dancer Geeta Chandran, and a producer on his Tony Leung-starrer Hema Hema: Sing Me a Song While I Wait (2016), whose equipment and crew (camera, light, and sound teams) went from India. “There’s also this progression. A lot of the Indians who came in, helped train the Bhutanese, and for Lunana…, the only person who came from India was our soundman (Delhi-based American Dave Stevens, who’d remove flapping prayer flags, to control wind disturbances while recording, even put a recorder in fresh yak dung to capture as much he could; the au naturel sound is designed by the veteran Duu-Chih Tu, who’s worked with Asian filmmakers Hou Hsiao-Hsien, Wong Kar-wai, Tsai Ming-liang, etc.). For my next film, I’m looking to get gear and support staff from India.” In Himachal Pradesh, Norbu told Dorji, “in this world, it’s very amazing to be a monk, but you can benefit even more beings if you’re a lay person. Imagine if you had the wisdom and compassion that was taught by the Buddha, but you are not confined by the vows and the robes, what if you could be a Buddhist president, a Buddhist lawyer, a Buddhist filmmaker, a Buddhist storyteller?” “It inspired me to stay on the Buddhist path and tell stories. In my language, when we say tell me a story, we say ‘untie a knot for me’. The act of telling a story has a liberating purpose, to lead us to a higher place,” says photographer-writer Dorji, who was working on a five-year photo project to trace the 7th-century Chinese monk Hiuen-Tsang’s 18-year Silk Road journey from China to India, before he met Norbu. “I’m always grateful to India. India is a large part of my heart and my life. My spiritual path is because of India. India gave the world Buddhism. Living in India is where I truly decided to become a storyteller,” he says. 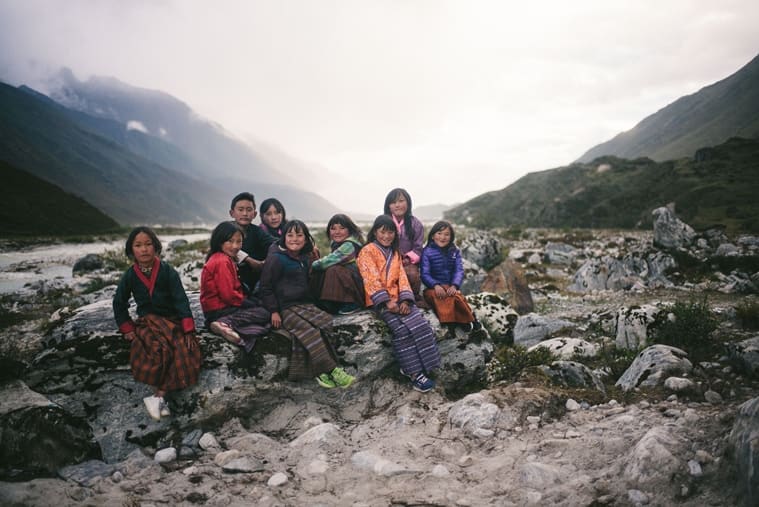 A working still from the sets of Lunana: A Yak in the Classroom

The love for stories took Dorji to Lunana (dark valley in Dzongkha), at 4,800m, with 56 inhabitants, reached after an eight-day trek, where even electricity hadn’t arrived. “We had one camera, no lights, not enough sun to power batteries to watch dailies (Dorji could see what he’d shot two months later), we ate dried vegetables, pungent, dried meat hanging in our host’s kitchen. We’d make fire with yak dung, could shower only once in two months, couldn’t make phone calls or check social media, the crew kept falling sick… it gets to you, but the journey shows you shouldn’t give up, that if you believe in your story, you should do everything to share it with the world,” says Dorji who was conflicted about rendering the people and the valley of Lunana vulnerable to outside forces.

But change is inevitable. On the last day of the shoot, as Dorji was packing up to leave Lunana, a group of government officials arrived to install telecom towers. Dorji recently received a Facebook message and TikTok dance video from Pem Zam, the film’s pivot, now 12. “As filmmakers, we must tell the story of our time, our culture, our people. I’ve tried to serve Lunana… as a reference for future Bhutanese, of what Bhutan was going through in their past, the migrations, and what Lunana was like before the roads and telephone arrived, before the stories and songs, the purity and innocence, were lost,” says Dorji.