On December 4, Maharashtra detected its first patient with new Covid variant B.1.1.529 or Omicron. In the last 26 days, the total number of Omicron cases, which is more transmissible than Delta, the dominant variants during the second wave, and also has a higher potential of immunity escape has surged up to 450 in the state as of December 30.

To add to the worry, nearly one-third of the samples have been detected with Omicron in Mumbai in the latest genome sequencing report, which indicated toward a possible community transmission, contributing in the doubling of Covid-19 cases within 24 hours.

A brief overview of the current understanding of the transmission of the Omicron variant.

How is Omicron different from the Delta variant?

Scientists have attributed this spike to Omicron. On November 26, the World Health Organisation declared it as a variant of concern due to its extreme level of contagiousness and ability to evade people’s immunity procured through the vaccination and past infection with Covid-19.

Omicron also has a faster incubation period (gap of time between someone getting exposed to the virus and then showing symptoms) than Delta variants. This is also being reflected at the 24 hours daily doubling rate in Mumbai. On December 29, the city reported 2,445 daily Covid-19 cases which surged to 3,555 the next day.

However, reports across the globe show that hospitalisation rates in Omicron compared with the Delta variant is less, including duration of hospital stay and the need for supplemental oxygen therapy.

It mainly causes mild symptoms which can be treated at home.

“The dominant Covid variant, Omicron, has different disease characteristics as compared to Alpha or Delta variants. International studies from South Africa or the United Kingdom indicate that the virus remains in the upper airways and doesn’t penetrate lung tissue or cause clotting disorders like its earlier variants—Delta or Alpha. Hence, Omicron is causing a lot of upper respiratory symptoms such as cold and flu but not major lung complications. As a reason, we are observing a softened, mild version of the virus which is highly contagious,” said Dr Hemlata Arora, senior consultant, infectious diseases, Nanavati Hospital. 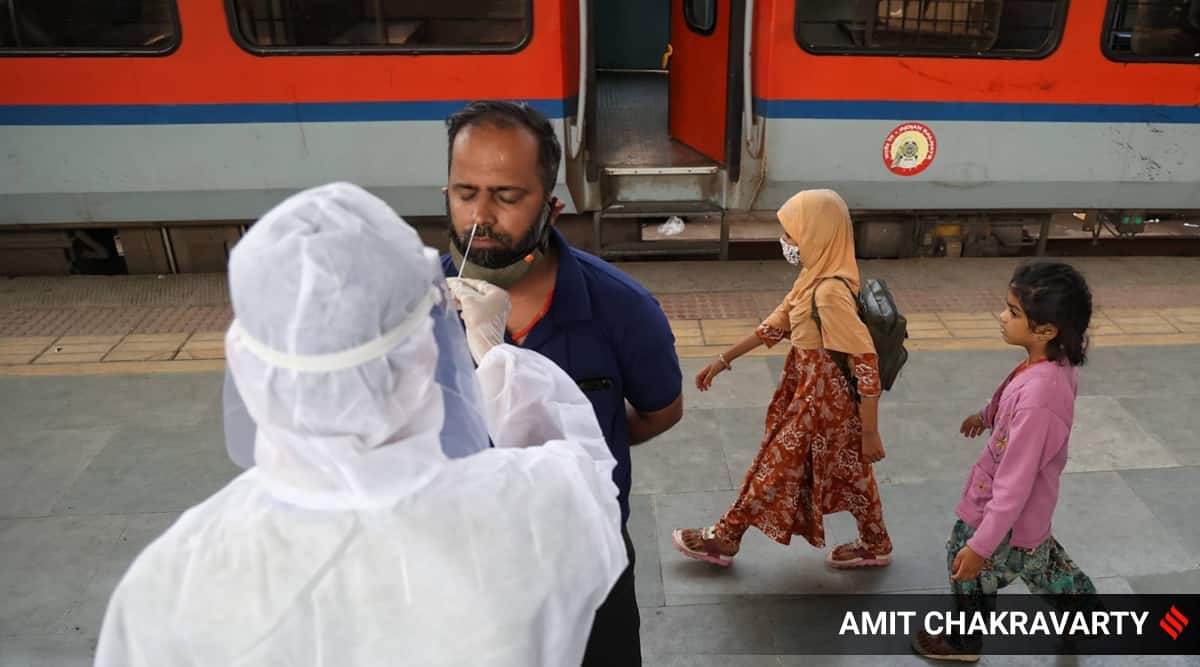 Outstation passengers are being tested on arrival at Mumbai’s Dadar station.

Suresh Kakani, additional commissioner, Brihanmumbai Municipal Corporation (BMC), said, “Out of the 327 Omicron patients detected in Mumbai so far, none of them required oxygen support. So, right now, the oxygen requirement among Omicron patients is nearly zero which is much higher in Delta patients.”

Although the symptoms are mostly common in both the variants, in Delta variants the severity is more with common symptoms like headache, runny nose, sneezing, sore throat and loss of smell. While in Omicron, most patients have fatigue along with joint pain, cold and headache.

How is the treatment protocol different from the Delta variant?

Union Health Secretary Rajesh Bhushan last week stated that the treatment protocols remain same for Omicron as that for Delta and Covid-19.

However, due to the low disease severity, doctors are considering a new antiviral drug by Merck—Molnupiravir – to treat infections in the early stages. Also, doctors believe that Monoclonal antibodies used efficiently to treat high-risk patients till now may have lesser efficacy against Omicron. 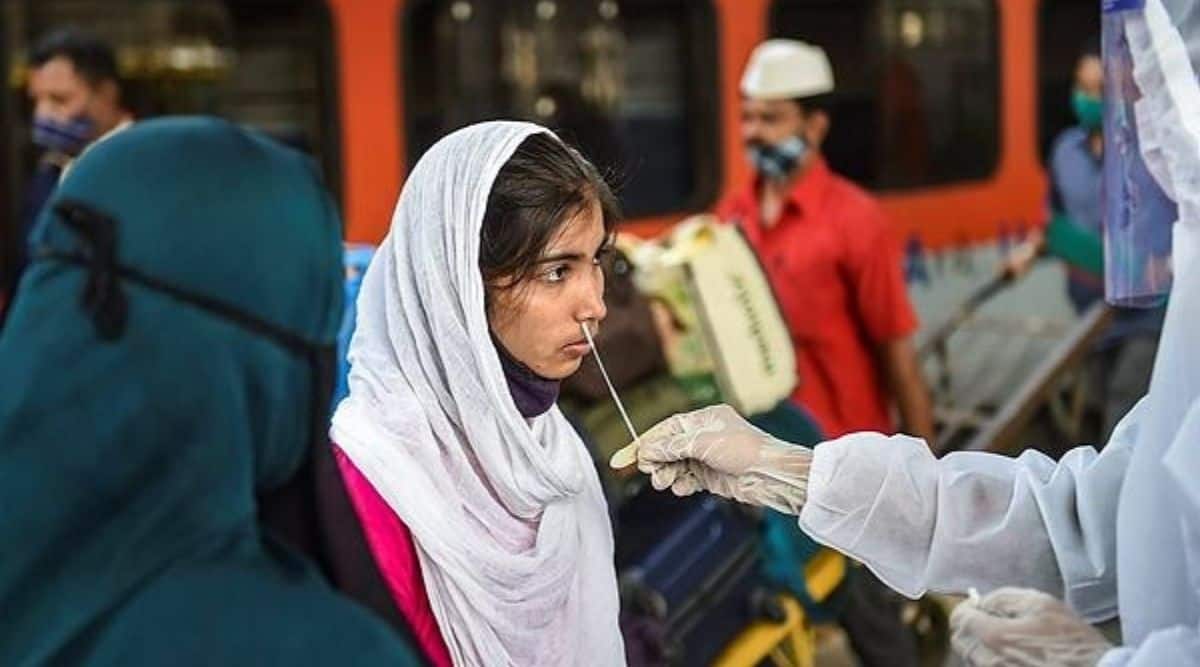 A health worker collects a sample of a traveller to test for Covid-19, at Dadar railway station in Mumbai. (PTI)

“The new version of Monoclonal Antibodies—Sotrovimab by GSK and Vir Biotech, which is currently not available in India, can be effective against the new variant. Common antibiotics and antifungals which were used to treat severe or long Covid infections are currently not being used due to the mild severity,” said Dr Arora.

Is Omicron more severe among children?

In the last few years, it has been observed that a large number of children below 18 years are contracting Omicron in the US. As reported, the data from US Centers for Disease Control and Prevention showed that the seven-day-average daily hospitalizations among children between Dec 21-27 surged up to 58% nationwide compared. This has raised concern among the parents as a pool of children were detected with Covid-19 in the second wave.

Experts have said that as the children below 18 years are still unvaccianted, the infection rate might be high with the opening of the schools but the fatality will be minimal.

A similar trend was observed in the second wave when more children contracted Covid-19 compared to the first wave in the state. As per the data procured by The Indian Express, between March and December 2020, a total of 67,110 children of the age group of 0-10 contracted Covid-19 in Maharashtra which surged to 1,36,975 in the second wave between Jan-August of this year. But the fatality remained constant at 0.16%.

“Covid Infection rate has definitely increased in paediatric population as compared to the second wave. Mostly the teen and pre-teen individuals, who have not been vaccinated to date and lack thus protective antibodies, are being infected at present. However, the trend is not alarming and young patients have mild symptoms,” said Dr Arora

Will the available vaccines be effective along with booster shots?

As seen in the last two weeks, 80% of the Omicron patients in Maharashtra are fully vaccinated. So the currently available vaccines may not be enough to stop the infection, but they do help in lessening the severity of the disease.

“Omicron due to its multiple mutation in its spike protein has developed the ability to invade the immunity acquired through vaccination and previous infection. So, the cases of reinfection and breakthrough infection will surge in the third wave,” said Dr Shashank Joshi, member of the Covid-19 task force.

In some cases, individuals with booster shots or as called the third vaccine have also been detected with Omicron. Doctors have, however, raised demands for the third dose to strengthen the existing immunity.

“Booster dose is a real necessity for the frontline workers and elders. Even though there is no definite enhancement in immunity with the new variant Omicron all patients falling sick even now may not be as a result of the new variant. Thus the booster will add to some immunity,” said Dr Sujit Chatterjee, CEO of L H Hiranandani Hospital.

What does the future hold for Maharashtra?

As the latest findings of genome sequencing in the state indicate, the variant has already spread at the community-level, so the cases are most likely to double up faster.

The civic-run Kasturba Gandhi Hospital in its latest genome sequencing has found the presence of Omicron in 37.6% of sequenced samples. Of the 375 samples sequenced from the community, 141 were detected with Omicron in Mumbai. Whereas in the previous genome sequencing, only 2% of the samples had Omicron.

Considering the transmission rate of Omicron, the state may record a higher number of cases than the second wave. On April 4, Mumbai recorded over 11,000 cases, the highest single-day count since the start of the pandemic in March 2020. But as per the predictions, the daily count may go over 16,000 in Mumbai in the anticipated third wave.

Dr Joshi said, “As the transmission rate of Omicron is much higher than Delta variant, soon, the state would be swamped with cases. But hospitalisation would be lesser compared to Delta infection, which is a bigger killer. Within weeks, Omicron will replace Delta in 80-90% of the patients.”

However, the severity will be low which will lessen the need for hospitalisation. “Despite the surge in cases, it is believed that the healthcare facilities won’t get overwhelmed as most of the patients will be mild and able to take treatment at home,” he said.

On Thursday, the state Covid-19 task force held a meeting where it was being suggested to impose restrictions in districts with the daily positivity rate of 10%. But it was being opposed as due to low severity, most of the beds are vacant and the oxygen requirement is below 30 metric tonnes. “Imposition of a fresh lockdown will be considered only if the daily demand for medical oxygen touches 800 metric tonnes in Maharashtra. So far, we are imposing certain curbs to stop the gathering of the public which is fastening the transmission rate,” said an officer from the public health department.

“Delta was the biggest killer, if Omicron dominates over Delta variants, it can mark the ‘endemic’,” said Dr Joshi.